It turns out you don’t have to have a spiel or strategy. A successful volunteer is both a passionate and a candid one. Words said in earnest will always mean more than practiced phrases scripted and polished. 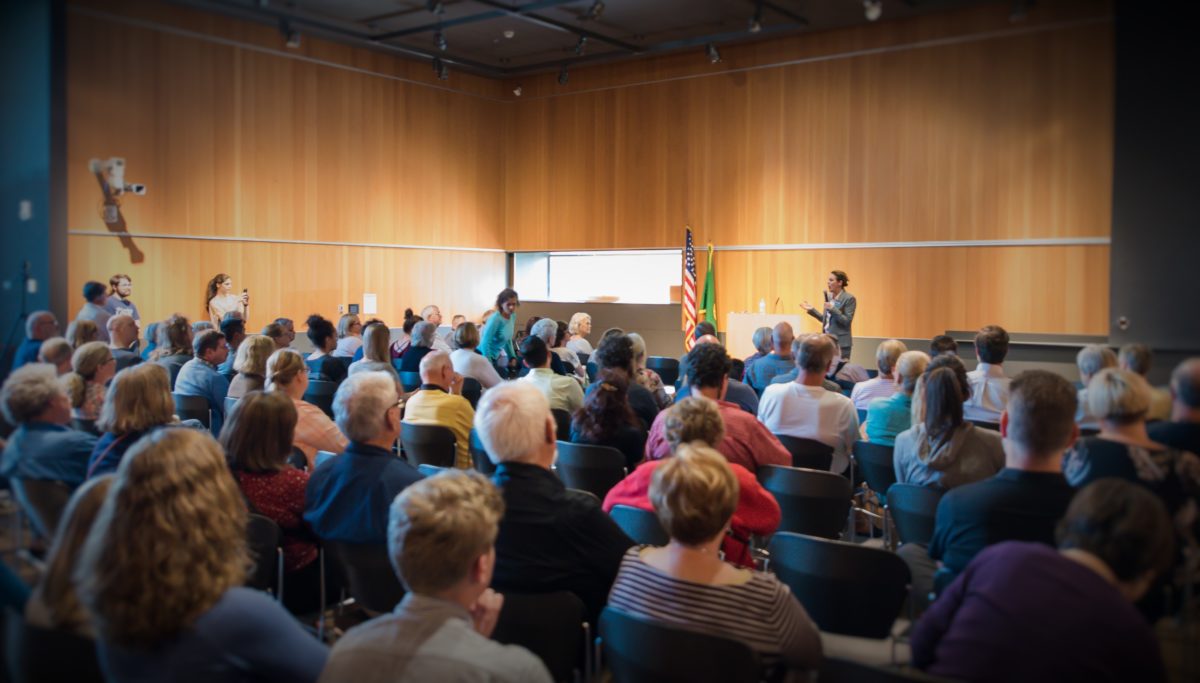 Of all the volunteer activities in which I have thus far participated, my favorite is tabling at the Farmer’s Market at Esther Short Park in downtown Vancouver. Political organizations are not allowed within the boundaries of the  market itself, but they may situate themselves within the “free speech zone” on either side of the sidewalk leading up to the market’s entrance. It is here that the other candidates station canvassers and plant signs, and activist organizations post volunteers to garner signatures for petitions. Carolyn Long’s campaign sets up a table under a shade canopy equipped with buttons, pamphlets, and volunteer sign-up sheets, and I mull up and down the sidewalk near the table offering informative pamphlets to park-goers and making small talk about ground-breaking topics like their adorable dogs or college alumnus attire.

Now that the weather is warmer, Saturday mornings at the Farmer’s Market have become my guilty pleasure. Even the children look forward to it all week long; they know they will get to walk through the market together and spend time arguing over how to split a $20 bill fairly between them and debating the most cost-effective snack purchases. This takes them about a half hour, and they generally spend the rest of my volunteer shift playing with the vast number of other children on the enormous playground.

This Saturday was no exception, but there was a minor adjustment to our usual schedule. Only the three younger kids accompanied me today, as my husband took the two older boys to the Timbers game in Portland. (I myself am an avid Timbers fan, but I have given up regular attendance this year to use the opportunity to volunteer for Carolyn’s campaign.) This meant the little ones had more money to split between them.

After about an hour, the children began to straggle up to me in turn, and one by one asked to help by holding the pamphlets being distributed. This has happened before, but boredom with this effort always quickly sets in and I did not have high hopes. Perhaps it was the added energy gained from only having to split the $20 bill three ways in lieu of four or five, but this time was different. After a short spiel from me reminding them to mention Carolyn’s Town Hall on June 5 at 6 PM, they each took a handful of pamphlets and skipped down the sidewalk a few yards. I stayed next to the table, continuing my mostly unsuccessful attempts to engage passersby, but I quickly began to notice that each group already carried a Carolyn Long pamphlet by the time they reached me. A few individuals even engaged me first, bubbling with enthusiasm for the charming little campaign advocates they had just encountered.

I decided to sidle down the sidewalk nearer to them in order to eavesdrop on their strategy. As I watched, I noticed a pair of bystanders now seated comfortably a few feet away, watching and laughing as the kids worked. An elderly man was engaged in conversation with Riley, the littlest one at eight years old but by far the most outgoing.

“Carolyn Long, eh? What’s she running for?” This was a reasonable question.

“Candidate,” Riley answered promptly without missing a beat. She grinned proudly as he chuckled at her response.

“Is she a red person or a blue person?” He continued.

“Blue!” All three chimed in excitedly.

“Well can you tell me anything about her?”

“No, but she’s down there at that table if you want to ask her any questions,” Georgia, the oldest at 12, piped in.

Carolyn was not there that day, but I gave them an A for effort. Unfortunately, a charming lack of knowledge about what I was even doing here was not going to be a strategy I could pull off at 40.

A few moments later, a dark-haired, slender woman dressed in workout clothes passed me, and paused to engage me after a brief encounter with my miniature indentured servants down the way.

“Are those your kids?” She asked.

“Yes, they did a great job. Can you tell me, though, in two sentences why I should support this candidate?”

One would think that I would have this nailed by now. I’ve been volunteering more Saturdays than not since the Farmer’s Market started, and I’ve lost track of the number of times I’ve explained my own compulsion to work so diligently on her  behalf. The direct question caught me off guard, though, and I faltered.

“Well, I went to one Town Hall and that compelled me to now spend every Saturday volunteering here, and dragging my children along against their will.”

“That’s great, but that’s not what I asked. Tell me about her.”

I can’t remember what I said. I fumbled along in a single run-on sentence, listing random traits, policy positions, and miscellaneous background trivialities, jumbling my words together at an accelerated pace as my voice squeaked to a higher pitch with each phrase. Eventually she put her hand up.

“Okay, you got me, I’ll support her. And now I will go tell 10 more people to support her, and that’s how we’ll win.”

“She has a Town Hall Tuesday,” I blurted out before she could stop me. She smiled.

“She’s phenomenal in person,” I explained. “Nobody can explain Carolyn Long like Carolyn herself.”

It took a few minutes for my adrenaline to calm down after we parted ways, but the question has continued to haunt me. I passed it along to the other volunteers sitting behind the campaign table.

“Two sentences? Interesting,” they agreed. “That’s a tough one.”

“She is a constitutional scholar and an educator, passionate about working together.”

“She is the only electable candidate, and the only one who can beat Jaime.”

We threw out practice responses intermittently for the next hour, but nothing stuck. That evening, I posed the same question to my husband, but instead of offering a response, he only asked for mine. I couldn’t repeat what I said. I honestly didn’t remember. I know I wasn’t eloquent, but somehow that didn’t matter.

It turns out you don’t have to have a spiel or strategy. A successful volunteer is both a passionate and a candid one. Words said in earnest will always mean more than practiced phrases scripted and polished.

So here are my two sentences now, from the heart.

Carolyn Long is a real progressive who also understands how to create real progress; she’s been working to do just that within our local community for over two decades, she relishes bringing people together who have a myriad of opinions to find a common ground and build solutions that meet everyone’s end goals. Our political system is fraught with childish and self-centered egomaniacs on both sides of the aisle who interact with the maturity and work ethic of toddlers, but Carolyn Long will be the adult who finally ends this nonsense.

you can see for yourself at the next event:

To learn more about Carolyn Long, visit ElectLong.com or follow her campaign on Facebook at Elect Carolyn Long. This blog is not affiliated with the campaign and is my own independent creation; all opinions expressed throughout are solely my own.

These are the rambling thoughts of a middle-aged mother who wishes she was a writer, but had to make money so she became an engineer instead. Please forgive my typos.